It was last summer whilst out running with a family member, that I knew I wanted to make a positive change somehow. It felt right to give back by doing something I had always done even as a child, run. Since I made the decision that day, many things have changed. Do I run a distance, do I come up with a new challenge, or would I take on an existing event? Eventually, I decided to run a number of full marathons, 42.195km. How many had yet to be decided. What I did know was, that it would be for a local cause, and that it would benefit children in some way.

I’m a 33-year-old Anglo-Maltese personal trainer who previously served 12 years with Her Majesty’s British Forces. I have always kept fit and healthy to some degree and pride myself in helping others realize their potential health and fitness goals. I have been living in Malta for four years now. I am engaged to the love of my life Natassja, and a stepfather to my precious princess Megan.

The search was on for a charity I felt would benefit from my event. It didn’t take long before I found DrKlown. I new very little about the NGO until I met Maurice and Christine, the president and vice president of DrKlown here in Malta. The more I learnt about the fantastic work they and the clowns did in the pediatric wards of Mater Dei Hospital, the clearer it became that this was an organization I wanted to do something for, as through them I could make a difference.
We immediately understood that our goal was similar, we both wanted to help children and bring happiness even in the most difficult of times. After visiting the pediatric wards, which was my first time, I was astonished at the staff’s level of professionalism, dedication, and courage that went into the daily running of the wards. After talking with the staff, we asked if they needed anything we could help with, or whether there was something that could be improved in the wards to make their lives easier. I found that the response we got was particularly selfless and kind, that is, to ask not for themselves but for the parents of the hospitalized children. They wanted to help the parents by giving them better sleeping conditions when they had to sleep at the hospital.

Having one of your children hospitalized for a length of time is hard enough for any parent, but adding restless nights does make the situation even more difficult than it already is! It was clear that parents spending the night, a week, or a few months with their hospitalized child would benefit from wall-mounted pull-down beds.

This has to be a place where they could get proper rest, giving them time to recharge and have the strength to face whatever the next day might bring. This in turn would give the children what they need from their parent; hope and courage to deal with whatever situation they were in.

We calculated that between the three pediatric wards we would need a total of 20 beds. In that way, all single rooms would get their own bed.

From that point on my task became clear. I would be running 20 Marathons for 20 beds.

Everyone said it was crazy to run 20 consecutive marathons. I think it’s crazy not to help someone when you truly believe you can.

Moreover, I have a strong belief that we are all capable of giving back to the community in some way. This could be a small gesture of kindness to a neighbour or friend, a decision to impact the people around us in a positive way, or making a choice to be the best version of ourselves we can be.

When this challenge succeeds, I hope it will encourage people to realize that no matter where we come from, what chain of events led to this point in our lives, or even how we think we are perceived by others, not only can we change our lives for the better but we also have the ability to change the lives of others!

In an age of uncertainty, and perhaps sometimes negativity at every turn, I’m just a guy that wants to make a positive change in my own way. With your help, I know this change is possible. With your help, we know we can achieve this goal and make a difference. You can do your part by donating, and helping us spread the message.

In 2015 Dr Klown progressed on all major fronts. The efforts of the previous year 2014 to increase awareness paid off in the number of volunteers who effectively joined the Association, the support of the general public as well as from groups, clubs and companies, the attention we got in the media. It was a successful year. One concern remains: to find a proper way to plan our services in such a way that we can fulfil our major goal, to visit Every Child, Every Week with our volunteers, most of whom have a full time job. We only missed a few weeks, but we regret every one of them.

The major goal for 2016 is the strengthening of the bond between the volunteers through further professional development and team building activities.

If you are enjoying these pages, it is due to the splendid work of the web-designers and developers at M7Alpha Creative Studios, who devoted their time and expertise to donate a new website to Dr Klown. A beautiful Christmas gift that is highly appreciated.

A BIG thank you! 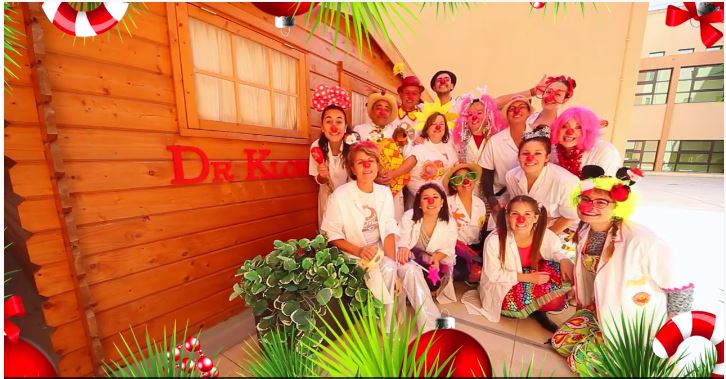 If you haven’t yet watched the music video made by our volunteers to thank all who support us with happy Christmas wishes, YOU DON’T KNOW WHAT YOU’RE MISSING! Almost 75,000 people reached and 25,000 views. Follow this link and join in to feel GOOOOOOD:

Don’t forget to hit the HD button for best quality!

They will continue their training on-the-job in the wards under the guidance of our experienced Klown Doctors, until they feel comfortable and got “the knack of it”.

Many private and Company groups supported Dr Klown by participating in the NoseOn! campaign, launched by Dr Klown early 2015. Have a look at our facebook page to see their funny pictures. Says Angelica X.: “We had a lot of fun discussing how we would picture our group with the red noses on! It was just hilarious!”
Here’s a picture of a group of MaltaPost, who packed, labeled and delivered our noses all around Malta and Gozo, with their NoseOn!

The campaign is still on – if you want to join in???

After the success of the special Dr Klown key chain last year, Playmobil employees created a girl friend for our boy-clown and produced a limited edition of cute girl clowns, which is in high demand!